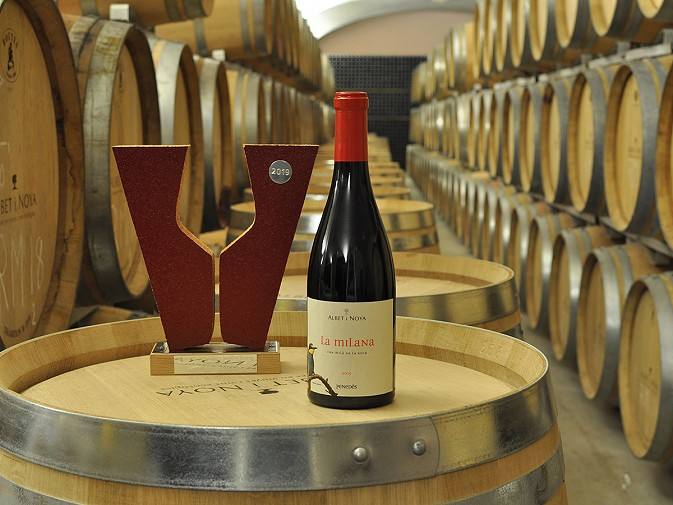 · La Milana is a wine from the Can Milà de la Roca estate and elaborated with the varieties Tempranillo, Merlot and Caladoc.

· The Classic Penedès Brut 21 Barrica has been awarded with a Bronze Vinegar.

Sant Pau d'Ordal, October 2019. The more than 18 months of Milana 's aging have been placed in the category of the largest wine stores. Its peculiar blend, with the varieties of Ull de Llebre, Merlot and Caladoc (cross between Grenache and Malbec); and its origins in the limestone terraces of the Finca de Can Milà de la Roca have given it the necessary personality to deserve the Vinari d'Or 2019 for the best red wine with more than 12 months of aging, delivered on Friday at the Vinari celebrated gala in the Auditorium of Vilafranca del Penedès.

La Milana 2014 has been chosen as the best black store among 948 references of 260 wineries, protected in any of the twelve denominations of origin of Catalonia. In this sense, La Milana has also taken the Vinari d'Or Award for Best Wine from the DO Penedès. Interestingly, a few months ago, this same wine was also awarded the 53rd Tastavins Contest for the best black breeding of Penedès.

It was not the only wine from Albet i Noya, rewarded during the night of the Vinari. Also the Classic Penedès Brut Barrica 21 2014 (chardonnay and pinot noir) took the bronze medal in the category of sparkling reserve.